Meetups and Mentors: Building a Support Network as a Software Developer 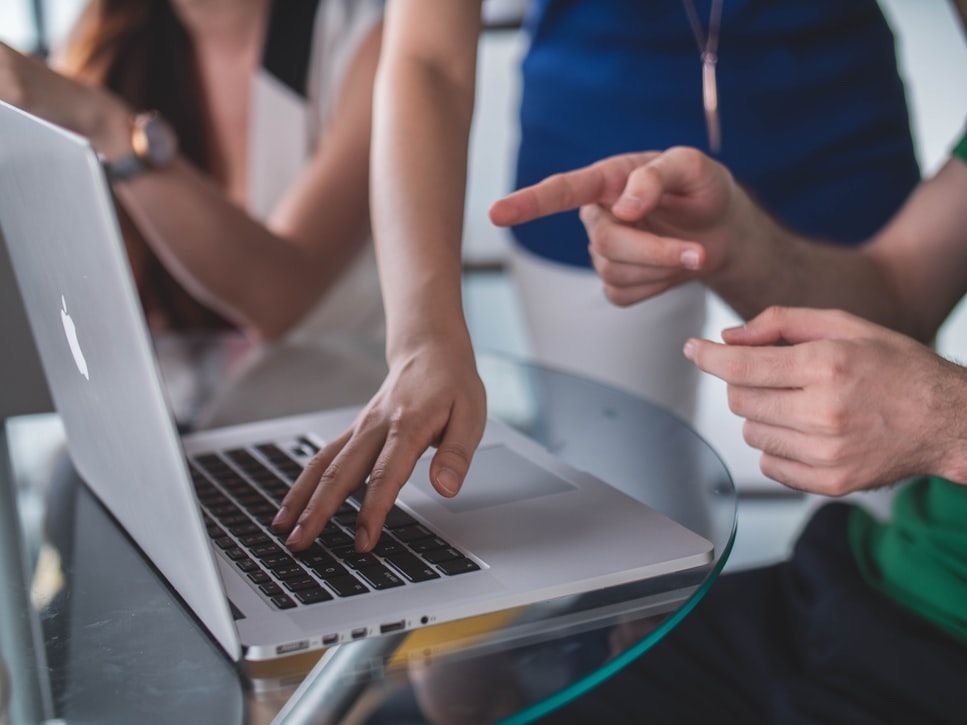 Meetups and Mentors: Building a Support Network as a Software Developer

Breaking into tech can be a tough journey. Between finding your first job to keeping up with the latest trends in technology – not to mention building out a network and talking to… actual… people – it’s enough to make you want to drop on your couch, throw on some reruns of The Office, and slam down a pint or two of Ben & Jerry’s.

Thankfully, we’ve got folks like Matthew Curtis, founder of the Austin Code Mentorship Meetup group. Focused on building an inclusive, supportive community for new developers, the group meets once every month to connect new and experienced programmers interested in collaborating on code. We asked Matthew to share his thoughts on getting into programming, founding the Meetup group, and starting a career as a developer.

What is your current role and how did you get your start as a developer?

At the time I started taking development seriously, there were several incredible movements towards the democratization of education - Khan Academy was moving from YouTube videos to a full-fledged education platform, Duolingo was helping break down language barriers, ivy league colleges were starting to release courses online for free as MOOCs, and educational podcasts like Stuff You Should Know were just starting to become a ubiquitous part of life. As a lifelong learning enthusiast, I found this push towards open education inspiring and soon came up with my own idea for an education app. The only problem was that I didn’t know how to code.

Luckily this movement towards open education had already reached the programming community and resources like The Coding Train, Free Code Camp, and Codecademy had established a strong foundation for new developers to begin their journey. So, when I moved across the country from NYC to Portland and struggled to find work, I started studying code full-time and frequented tech events for the free beer and pizza. About two years after I started my development journey and during a miserable stint as a customer service representative, my partner at the time offered me a challenge: contact 30 companies in 2 weeks asking for programming work.

I made a spreadsheet of every tech company in town, sorted by how interested I was in their work, and started emailing them whether they had job listings or not. If they didn’t have a junior-level position available, I would just ask if I could intern with them. In the end I accepted a paid internship position at a design studio with the recommendation of someone I had met at a recent tech event. Funnily enough, the internship paid about as much as I was making as an established audio engineer in NYC!

Unfortunately the agency underwent a dry spell and wasn’t able to offer me a position when my internship was complete. Unemployed again, I was lamenting my woes to a friend of mine at a Saturday morning networking event called Mentorship Saturdays when the friend asked if I wanted to intern at the company he worked for. A few months later, I was hired on as a full-time developer focusing mostly on the front-end!

What is the Austin Code Mentorship group? 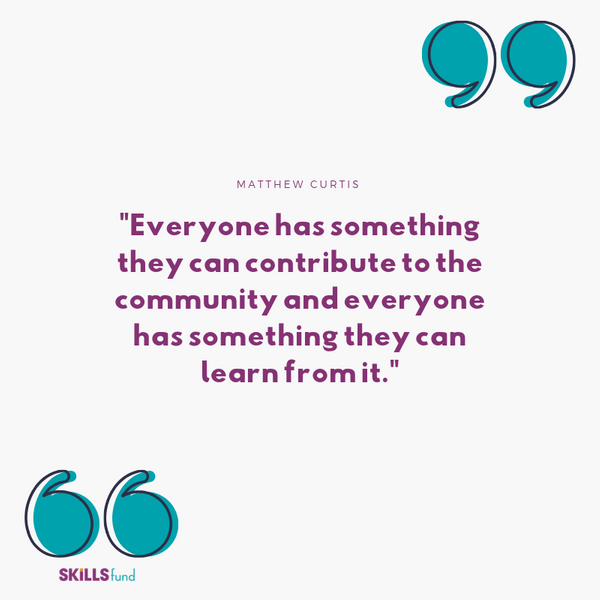 Austin Code Mentorship was my way of recreating Portland’s Mentorship Saturdays. When I moved back to Austin, I found that most tech events were on weekday evenings and were typically lecture based. Tech talks are great, but it’s hard to have talks that reach a broad audience - often the subject matter is too advanced or too simple for people depending on where they are in their journey. I also found that with Austin traffic it was nearly impossible to reach weekday evening events on time.

So I decided to start Austin Code Mentorship. We’re a monthly, Saturday morning event that is incredibly loose in its structure: we show up, introduce ourselves, and then spread out to do our own thing. Sometimes someone takes over a room and does a talk, people with tech questions can find mentors to help them through a problem, and a majority of people just hang out and talk tech.

Our main guiding star is a desire to create an inclusive, collaborative community and we aim to reach this goal by welcoming people from all backgrounds, experience levels, and tech stacks to come contribute as a mentor and a mentee; that’s actually one of our core principals - everyone has something they can contribute to the community and everyone has something they can learn from it.

How did the group get its start and how has it evolved since then?

We started with just a handful of people and a room reserved at the Terrazas branch of the library. Word spread about the group and, when we outgrew the library, Keet Health was gracious enough to step up and start hosting us. Austin Code Mentorship just kept growing and eventually we moved to Indio Technologies - we now have a whole floor to spread out on! We’re so grateful that they open their doors on a Saturday morning just so we can come mess up their beautiful new office space

One of the exciting aspects of our evolution has been watching people step-up into leadership roles. We have several senior-level regulars who come to do talks on new technologies, practice technical interviews with people who are job hunting, and provide 1-on-1 mentorship to people who are just starting to learn to code.

Another really encouraging change has been watching people who started as job seekers find work and return as mentors. Looking for work is laborious, discouraging, and dehumanizing. It’s helpful to have people who understand the struggle, especially if those people have gone through the struggle recently and can offer advice and support.

How do you balance the responsibilities of a job with organizing a community as a volunteer?

I think everyone has a distraction at work - Reddit, chatting with coworkers, stealing office supplies, etc. Mine just happens to be Austin Code Mentorship.

Luckily with the loose structure of the event, ACM doesn’t take up too much of my time. I just email potential sponsors, manage our Meetup page, and answer JavaScript questions on Slack. Occasionally I’ll go to other tech events or answer development questions on the Austin Digital Jobs Facebook group, but that’s mostly stuff I would do anyway.

It also makes a big difference that I have help. Alex Doll co-organizes the group and Kelly Fox is our Slack admin.

What advice do you have for people trying to break into the field of software development for the first time? 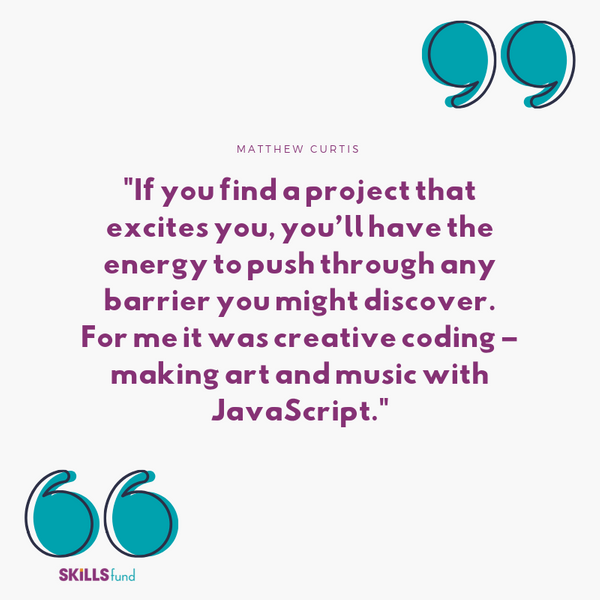 People talk about development like it’s the silver bullet against all of their problems, but it’s really not for everyone. The typical development cycle jumps back and forth between extreme monotony and migraine-inducing complexity. It’s also very competitive - our group is filled with brilliant developers who just can’t seem to get their first break.

So my first piece of advice is to stop and analyze why you think learning to code is the answer. If you still think it’s the right path, you should start going to free tech events and start teaching yourself the very basics of programming. No one should spend thousands of dollars on a bootcamp without knowing the basics of variables, conditionals, and loops.

My second piece of advice is to find a problem that interests you. Development is an incredibly broad field used by everyone from artists to architects. The development cycle is frustrating, though if you find a project that excites you, you’ll have the energy to push through any barrier you might discover. For me it was creative coding - making art and music with JavaScript. It strengthened my programming chops, forced me to explore subjects I had never before considered, and filled my portfolio with projects that differentiated me from the average junior developer. 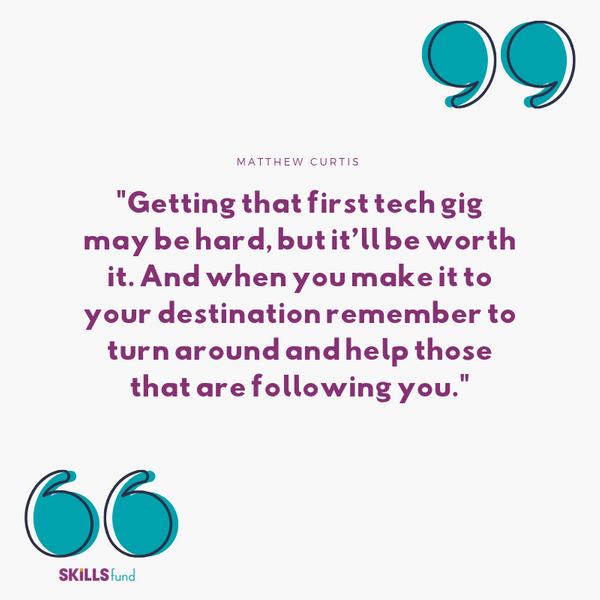 In the end, I never made that education app. Still on my todo list.

My path into the tech industry was long and winding. But it was also transformative - within just a few years I tripled my income and finally got healthcare! What’s more though, is that I finally feel like a respected part of the companies I work for. Before I had felt like an expendable tool, begging for work with no clear future. I may still be a cog in the machine, but at least I feel like a valued cog!

So if you decide to go down this road yourself, remember to keep your chin up. Getting that first tech gig may be hard, but it’ll be worth it. And when you make it to your destination remember to turn around and help those that are following you.

Meetups are a great way to plug in to your local tech scene. Using search terms like tech, code mentorship, or JavaScript can be an easy way to find out more about the developer community in your area. Better yet, you could be like Matthew and start your own!

Ready to go down the road to software development? Skills Fund partners with schools across the country to help students make the transition into tech. So finish that episode of The Office, polish off your Cherry Garcia, and get started today!