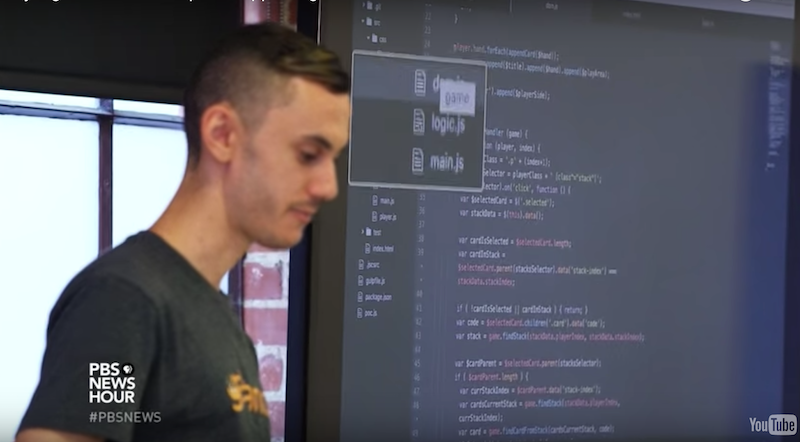 JUDY WOODRUFF: And, tonight, we wrap up our week-long series Rethinking College with a look at students who are choosing cheaper and shorter computer coding training as an alternative to a college degree.

Hari Sreenivasan has our report.

WES REID: I’m going to show guys a tool. If it stresses you out, don’t use it.

HARI SREENIVASAN: The academics are difficult, but the camps all but promise jobs that pay more than double the median income in America.

HARI SREENIVASAN: So tough, only 20 percent of those who apply get accepted.

WES REID: The things that we’re really focused on is, how do we get people as career-ready as fast as possible?

HARI SREENIVASAN: Students are flooding in. From 2014 to 2015, the number of graduates from coding boot camps jumped by 138 percent.

MAN: And there isn’t, like, any general education classes that you have to take or stuff that’s not necessary used for your end goal.

HARI SREENIVASAN: It’s a learning model that is not only experiencing explosive growth, but also attracting tens of millions of dollars of private investment.

JIM DETERS: The world is evolving so quickly that, in these times, we have got to constantly be reskilling, upskilling and moving.

JIM DETERS: We have grown to 1,700 students we will teach this year.

HARI SREENIVASAN: Jim Deters is the CEO and founder of Galvanize.

JIM DETERS: We have moved to a skills-based economy, and we want to create alternative paths for anybody with aptitude, drive, and determination to have an opportunity and get more affordable access to skills.

So far, federal education officials like what they see. Last month, the Department of Education opened up $17 million for students to pay for boot camps like New York’s Flatiron School.

JOHN KING, Secretary of Education: We’re trying to identify pathways that will help people get access to good jobs in high-demand fields.

HARI SREENIVASAN: Some boot camps aren’t waiting for government funds to help their students pay the $10,000 to $20,000 tuition costs. Galvanize has partnered with the private lender Skills Fund. Skills Fund allows students to pay interest-only loans until they graduate.

JIM DETERS: Regardless whether they have a B.A., or dropped out of community college, or they came from straight out of high school, we want to create that pathway.

ISAAC COLLIER, Student: I was an audiovisual technician, and I was also instructing martial arts, and instructing teaching of guitar. The pay was never enough. It just got tiring. It was paycheck to paycheck.

ISAAC COLLIER: I was like really, really nervous. It was too expensive.

HARI SREENIVASAN: But, once accepted, Collier found that getting a private loan was easy. That’s because Skills Fund partners only with coding boot camps that have high graduation and job placement rates.

JIM DETERS: Our placement rates are around 90-plus percent.

HARI SREENIVASAN: After boot camp, Collier expects to land an $80,000 salary as a software developer.

ISAAC COLLIER: It’s something that’s very challenging. It’s very hard, but I feel like the reward is well worth it.

WES REID: The determining factor isn’t if you had higher education. It’s how much you’re willing to work during the class and really put in the effort.

HARI SREENIVASAN: Alexander Holt is a policy analyst with New America. Holt likes the Skills Fund model, because, unlike traditional student loans, the money is tied to actual job placement.

ALEXANDER HOLT, Policy Analyst, New America: Effectively, what Skills Fund is trying to do is be a private market accreditor, so they’re trying to mimic what the federal government does, except all the incentives are in the right place in the private market.

JIM DETERS: We won’t get paid if they don’t get paid. We’re really aligning our interests with both the student and the lender in a way, honestly, that it should be.

ALEXANDER HOLT: It makes more sense to have the risk on private lenders and private companies, as opposed to the taxpayer.

HARI SREENIVASAN: Critics of the department of education’s new EQUIP program are concerned government lending may encourage the kind of abuses that became notorious with for-profit colleges.

NARRATOR: We are Corinthian Colleges.

ALEXANDER HOLT: You open up all of these federal dollars, and you don’t have great accountability, and bad actors flood in. And these schools end up just enrolling a lot of low-income students, and we have terrible outcomes, and the students are left with debt.

HARI SREENIVASAN: Given that for-profit colleges have a mixed track record, at best, of succeeding in putting people back in the work force, why? Why take this route?

JOHN KING: This is a very targeted initiative focused on work force development. We will rigorously evaluate it to make sure that it’s working. If programs aren’t working, we will stop them.

ALEXANDER HOLT: One thing that’s unclear is, are employers hiring these people because they also have a bachelor’s degree? Will they just hire them if they only have the certificate from the boot camps?

ISAAC COLLIER: It’s a good challenge. It’s always overcoming obstacles. And I feel smarter, honestly, after it. I just — I do.