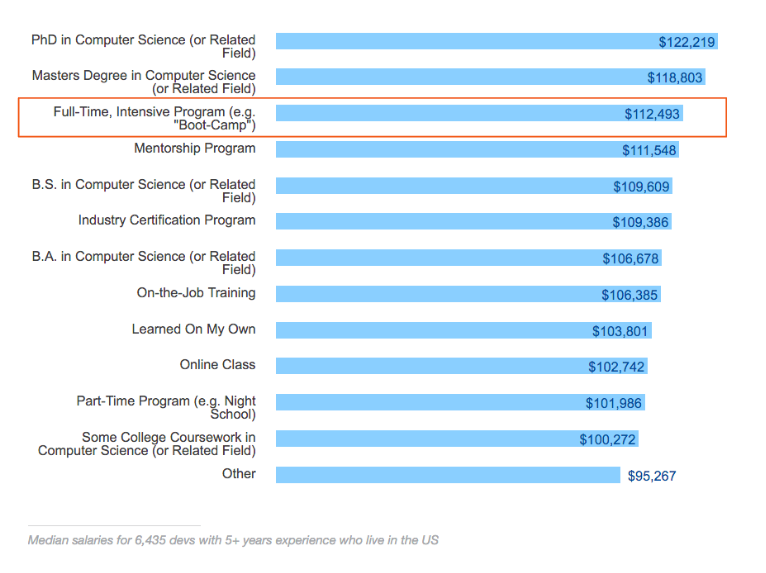 One of the most common questions we get here at Bloc is: “Don’t I need a Computer Science Degree to become a developer?”

The answer, in our opinion, is no. Last year President Obama pointed to bootcamps –saying “It turns out it doesn’t matter where you learned code, it just matters how good you are at writing code.” He was referring to an economic shift from a credential-based economy to a skill-based economy. Employers and hiring managers care less about where you went to school and more about your ability to deliver high quality work as a dedicated contributor to a team.

“It turns out it doesn’t matter where you learned code, it just matters how good you are at writing code.”

Recently, our friends over at Stack Overflow published some data that actually shows that this shift happening.

Stack Overflow (Quora for Developers) just released their 2016 industry wide survey of over 56,000 developers. They found that 57% of developers don’t have a CS degree. Even more telling, bootcamps (an institution that didn’t exist 5 years ago) now represent 6.5% of the industry. So no, you don’t need a degree to get hired.

The second question we often get is “Won’t I be more successful if I have a degree?” The answer to this one surprised even me. Up until recently, we probably would have advised students that if they can afford to quit their job and go back to get a degree in Computer Science, they would probably be able to command a better salary if they did.

But that appears to be changing.

Among the many fascinating statistics in Stack Overflow’s report (like that developers under age 50 prefer Star Wars to Star Trek, which, as a staunch Picard fanatic, sorta broke my heart), they also broke out salaries by education-type. This first chart shows global salaries normalized across country.

US Salaries for Coding Bootcamps vs. Computer Science Degrees

So the answer to “won’t I be more successful if I have a degree” is actually unclear. Our answer today is “maybe, but maybe not for much longer.”